A Wow Moment That Gives Hope

So much of the news today feels angry, sour and exhaustively partisan. Sometimes, the soul simply longs for that which speaks of a greater cause, genuine connection, and a unity of purpose. Vicki Corona, an author writing about the beauty of dance, once said, “Life is not measured by the number of breaths we take, but by the moments that take our breath away.” This Tuesday night at Grace United Methodist Church in Harrisburg, PA, was one such moment.

Hundreds of government leaders, pastors, ministry leaders and like-minded citizens joined together for a PrayUSA Pennsylvania event.  As participants walked into the sanctuary, they left their titles and positions at the door and entered simply as people of faith—unified under one banner…to humbly call the church to unceasing prayer in America’s fight for religious freedom and liberty.

Thirty-five members of the Pennsylvania Legislative Prayer Caucus took part in this historic gathering. Both sides of the political aisle celebrated an experience that transcended denominations, race, and gender as they stood side-by-side without regard to divisions… barriers came down. Watch now!

Representative Rick Saccone called the church to stand to reflect on and persevere against the anti-faith culture that is rising up across America. He spoke of us entering our darkest hour, and hope only being found in a nation and a people willing to return to God. Prayer, he said, is the best way to keep the United States from continuing its slide into a, “culture of chaos and destructive behavior.”

Many in attendance indicated they had never witnessed anything as moving and significant from legislators who shared so passionately from their hearts. The impact of elected representatives and pastoral leaders standing this united exposed the fallacy and frequent misapplication of intent when it comes to the “separation of church and state.” 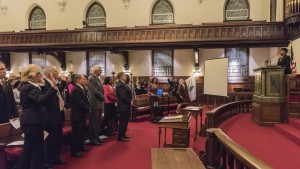 Abby Abildness, Pennsylvania Prayer Caucus Network State Director, said, “The atmosphere was charged with enthusiasm. People who wouldn’t normally be meeting together were present…Everyone was honoring one another, and it was a very holy experience.”

Others described the prayer gathering as healing. Government officials from across the board, along with citizens from different Christian denominations, and all unified by the power of prayer, is something that is rarely seen.

Representative Bryan Barbin reminded everyone that in the late 1700’s, the Continental Congress began with prayer so there would still be a measure of unity whenever they found themselves in conflict.  Barbin went on to say, “Prayer is the unifying factor!” And with that, everyone joined in a rousing cheer.

Representative Thaddeus Kirkland added, “I don’t pray in Jesus’ name to be offensive, I pray in it to be effective.”

At the conclusion of remarks given by government and church leaders, participants were led in signing the Call to Prayer for America Proclamation. Remarkably, the desk used as they signed the Proclamation was also used by legislators at this same site over 100 years ago. When the Pennsylvania capitol burned to the ground, government business was conducted in the church while the building was being restored. What an incredible moment as history unfolded before our eyes!

Victories like this are worth celebrating—answered prayers and hope renewed.